The total demand for investment capital from the State budget of Van Don economic zone for the period of 2019-2030 is estimated at VND 8,350 billion.

Quang Ninh Provincial People’s Committee has just promulgated a plan to implement the Prime Minister’s conclusions on investment and development of Van Don economic zone. The goal of the plan is to make Van Don one of the economic drivers of Vietnam, one of the leading groups in the livable city of Asia – Pacific. 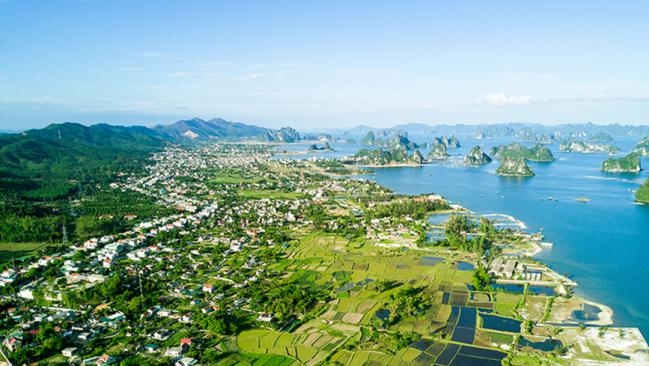 In particular, the top task set by Quang Ninh is the development of transport infrastructure. Specifically, for air transport, the provincial People’s Committee’s plan stated that the province’s goal is to study investment, expand and increase the capacity of Van Don airport to reach over five million passengers and 30 thousand tons. goods by 2030.

Besides, Van Don will attract investment in building a number of heliport (helicopter taxis) on islands to facilitate travel between Van Don and Ha Long, Mong Cai and a number of other islands. hovercraft shape.

Quang Ninh will also invest in the construction of a coastal road, running along new urban areas along Bai Tu Long Bay according to the 44m cross-road standard; the consolidation road is parallel to the Van Don – Mong Cai Expressway and transversal axes connecting the consolidation road with 334 and coastal roads; axial roads along Ban Sen commune and road bridges from Ban Sen to Quan Lan according to the standards of grade III mountain roads, the road surface is from 7.5m to 10m wide.

In addition, the province will renovate and upgrade the main road along the Quan Lan – Minh Chau floating island, Quan Lan – Yen Hai road into a delta grade III road. Upgrading the route through Ngoc Vung Island, from Cong Yen wharf to the center of the commune and Truong Chinh beach area. Study and build cable car from Cai Bau to Tra Ngo Island – Cai Lim.

Regarding tourism development strategy, Quang Ninh aims to develop high-class tourism in Van Don, striving to attract about 2.5 million visitors by 2030. Including over 170,000 foreign visitors to Van Don.

To accomplish this goal, for the tourism infrastructure, the province will continue to prioritize, support and urge strategic investors to implement investment projects on tourism and vacation complexes. high-end resort with casino – an award-winning game aimed at creating high-class tourism products that attract tourists, especially Asians.

For tourism products, Van Don will focus on attracting investment in the development of modern tourism products and services, interactive and simulated games based on information technology platforms and other Amusement park, theme park on an international scale. Research to attract attractive and high quality tourism products capable of exploiting and attracting tourists all year round, especially in winter. Developing high-class tourism products combining health care, medical tourism, tourism combining study, experience and sports to meet the needs of tourists

Also according to the plan of the People’s Committee of Quang Ninh province, the total demand for investment capital from the state budget for the period of 2019 – 2030 is based on the master plan of socio-economic development of Van Don economic zone till 2020, with a vision. by 2050, the approval of the Prime Minister will be VND 8,350 billion

In particular, the provincial budget reserved resources and allocated VND 2,400 billion in the period of 2019 – 2025 to invest in infrastructure for Van Don economic zone. Proposing the central budget to balance resources and supplement Van Don economic zone with VND 2,100 billion in the period of 2019 – 2025.